ALBA ADRIATICA (TE)
Alba Adriatica is a popular beach resort of about 10,500 inhabitants (the whole municipality) located at the northern end of the Abruzzo region, a few kilometers from the border with the Marches. The wide beaches (widths up to 100 m.) Of fine sand silvery-gold, the promenade in the green palms and pines, and the many comfortable hotels and nightlife pose the lakeside town of Abruzzo to the level of the most famous places along the Adriatic coast and make it a summer destination of choice for tens of thousands of Italian and foreign tourists. In the center of Alba Adriatica is the ancient Tower of Vibrata century tower built with the function of defense of the coast.
The heart and the most lively of Alba Adriatica is its waterfront: beautiful, long and wide. You can take quiet walks in bike, run or skate. In fact the whole "Riviera Blue" from Martinsicuro in Roseto degli Abruzzi (30 km) can be traveled in peace of mind thanks to a bike path called Green Corridor Adriatic, completely independent of the vehicular and pedestrian circulation, which was carried out between the roadway and the sidewalk (waterfront).
The little ones, certainly will want to spend many hours in the "Bambinopoli" Municipal, an oasis of leisure and tranquility just steps from the sea.
--------------------------------------- 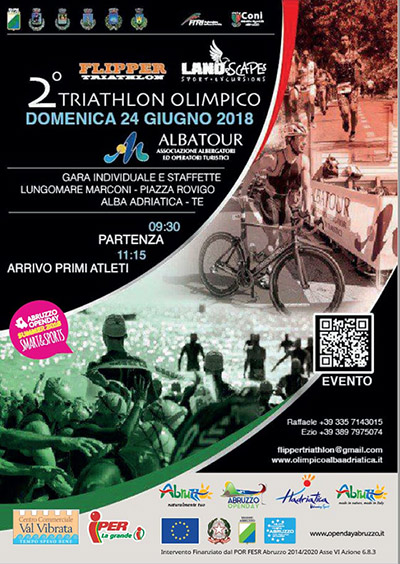 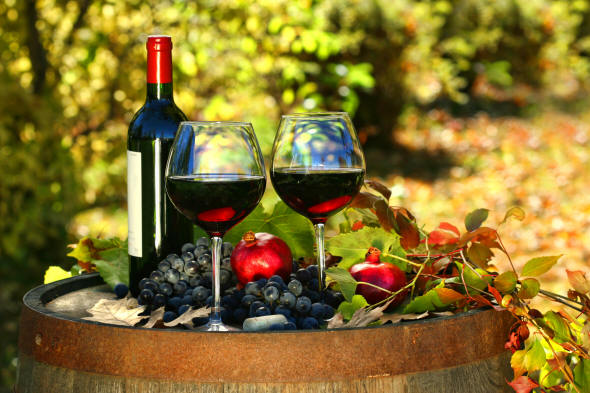 All along the coast of Teramo are countless detours on the trail of the local. First, this is the area of vineyards: in addition to classic Doc Montepulciano (Montepulciano Cerasuolo) and Trebbiano d'Abruzzo, in a small geographic area that includes the towns of Controguerra, Torano Nuovo, Ancaster, Corropoli and Colonnella, you grow grapes for production of the Doc "Controguerra", both red and white. One of the Wine Roads, reported from the region with specific signs starts from Alba Adriatica.
Also with regard to the Oil Routes, in the province, are two of the most famous: the one that goes from Giulianova inward going to cross the centers of Mosciano Sant'Angelo, Sant'Omero and Campli and the one that climbs from Roseto degli Abruzzi to Morro d'Oro, Notaresco and Atri.
----------------------------------
What to see around Alba Adriatica?

MARTINSICURO
Martinsicuro (at 2.7km), the most north of the Abruzzo coast, where you can admire the "Tower of Charles V," the mighty building of the sixteenth century, quadrangular bulwark of sighting the mouth of the Tronto; Interestingly the newsstand of the facade enclosing the heraldic insignia of Emperor Charles V. We should also mention the Church of the Sacred Heart of Jesus, which houses a valuable painting apse of Joseph Pauri and "Villa Barnabei", stately home dating back to 1866.

COLONNELLA
Along a road dotted with vineyards and orchards you head Colonnella (6 km). Standing on top of a hill from which you can enjoy an enchanting view. The old buildings, squares and the plots of alleys and stairways form the backdrop. The historic center of Colonnella, dominated by the Church and the Civic Tower Clock, is characterized by numerous narrow streets, called in dialect "rue". Among the oldest buildings recall the palaces Volpi, Marzi, Pardi and Grilli.

CIVITELLA DEL TRONTO
Civitella del Tronto, town perched on a hill at 589 m. s.l.m. and full of charm and history that overlooks the rivers Vibrata and Salinello and offers stunning views of the Monti della Laga, the Gran Sasso and the Mountain of Flowers, where does the river Vibrata. Symbol of Civitella is its fortress, stronghold of the Bourbons before the unification of Italy, which is a real fortified citadel; This fortress is one of the most impressive works of military engineering in Italy; Europe is the second largest fortress: extends for 500 meters long and covers an area of 25,000 square meters. with very thick walls and sloping; the town retains many medieval and Renaissance buildings enclosed within the walls. Civitella del Tronto is in the National Park of Gran Sasso-Monti della Laga and the surrounding area offers the possibility of interesting nature trails.

CAMPLI
Campli, situated on a hill between the valleys of the rivers Fiumicino and Siccagno; rich with ancient architectural monuments, an important necropolis of the Iron Age and some burials, you can also admire the fourteenth century church of St. Nicholas and St. Francis. The town, however, is dominated by the Fortress Balascio founded around the year one thousand.

TORTORETO (2.9 km) is the most southerly resort on the coast.
The town of Tortoreto Alto, which with its 227 meters above sea level is almost a "terrace" on the sea, still guards rich evidence of the Renaissance. To visit the historical center with towers, arches and narrow rue, preserves the walls of a fortified medieval village, the Clock Tower, built on an ancient stone base and brick, belongs to the medieval period. The Church of Mercy, preserves splendid Renaissance frescoes by Giacomo Bonfini. The church of St. Augustine, with altars made in the Baroque style. The Fortellezza is a natural terrace from which you can admire the wonderful view of the opposite coast.


ASCOLI PICENO
The city is located in the southern part of the Marche region and is about 28 km from the Adriatic Sea and about 35 Km from Alba Adriatica. Its urban center is located at an altitude of 154 m above sea level, in the area of ​​confluence between the river and the river Tronto Castellano, surrounded on three sides by mountains, among which there are the mountains of Ascension, the hill and the San Marco Mountain of Flowers. Its territory is surrounded by two protected natural areas: the National Park of Gran Sasso and Monti della Laga National Park to the south and the Sibillini Mountains to the northwest. Ascoli Piceno is one of the monumental cities of Italy, in which there are many styles, Romanesque, Gothic, Renaissance, Baroque ...; its historic center is built of travertine, a sedimentary rock limestone extracted from quarries in the area, and is centered around the Renaissance Piazza del Popolo where some of the most important buildings including the Palace of the Captains, the historic Caffè Meletti and church of San Francesco. Other core city is the urban space of square Arringo, the oldest square in Ascoli, where rise the medieval Baptistery of San Giovanni, the Cathedral of St. Emidio, which encloses the crypt also dedicated to the patron saint. There are also the Bishop's Palace, the palace dell'Arengo, home of the civic art gallery and some municipal offices. Not only the squares, but also the streets and alleys of the medieval imprint genuinely help to characterize the historic center. Among the monuments are to remember: the Roman bridge Solestà, one of the few in Italy, also visited the inside, the ruins of the Roman theater, the caves of the Annunciation, mammoth building of the Roman period, the Fortezza Pia and the Forte Malatesta , the building with the tower of Lombard Ercolani, one of the surviving towers between the two hundred that appear in medieval chronicles, for which Ascoli has the nickname City of a Hundred Spires. Also there are many churches, cloisters, squares and fountains to visit.
OFFIDA
Offida is a town in the province of Ascoli Piceno, which is about 35 Km from Alba Adriatica. And 'situated in the center of the Sub Marche, whose territory is situated entirely in the river valleys Tesino (north) and the river Tronto (south).
The town owes its irregular plan to rocky outcrop on which it stands, carved out by the two arms of springs, the torrent Lama, left tributary of the Tronto.
Offida entered May 2, 2008 in the club of the most beautiful villages in Italy. There are remains of medieval walls with towers, while the sixteenth-century fortress remain a stretch of wall and two cylindrical towers. The historic center of Offida is enclosed within the ancient City Wall (sec. XII), the starting point of an ideal route through the streets and squares of the country, a path along which there are monuments of great historical, artistic and architectural testimony of an illustrious past. In the main square stands the Town Hall, an elegant building dating from the eleventh and twelfth centuries that still represents the heart of the administrative life of Offida.
Inside the town hall is the Teatro Golden Snake, a true gem of Baroque conception of proscenium type or, as commonly called, the Italian, with diagram "horseshoe".Not far away the Collegiate Church, which houses the crypt reconstruction of the Grotto of Lourdes; the Addolorata Church which houses the coffin of the dead Christ and the Church of St. Augustine, with the adjoining Chapel of the Eucharistic Miracle The most important monument of Offida is the church of Santa Maria della Rocca, rebuilt in 1330 on a small church in the eleventh century.
Tourist itinerary can not be forgotten the Museum of Offida and the 'former convent of San Francesco which houses the Enoteca Regionale delle Marche. Offida, with over 1,100 hectares of vineyards, is the town of the province of Ascoli Piceno with the largest vineyard area and one of the first of the Marche Region. In recent years, with studies and research on varieties, production techniques and winemaking, has achieved a quality of the wines of great excellence that, increasingly, are affirmed in both expert and consumer.
There are four D.O.C. in the area: Rosso Piceno, Rosso Piceno Superiore Falerio Hills Ascoli and Offida Doc's recent approval. It is also typical Vino Cotto, is a very sweet wine and liqueur that is obtained by cooking the must not yet fermented, usually served after a meal, accompanied to dessert.
And The Mystras, which is an artisan liquor that is obtained by distilling wine, flavored variously adding anise or herbs, and is an effective digestive.

MONTEPRANDONE
Is located in the center of the Sub Marche, located in the hinterland of San Benedetto del Tronto, just 5 km from the Adriatic sea and 15 from Alba Adriatica. Monteprandone, in the province of Ascoli Piceno, stands on a hill at an altitude of 280 above sea level, which is about five kilometers offering breathtaking views of both the sea and the nearby mountains. And 'the home of St. James of the Marches and the painter Carlo Allegretti.
The first historical document concerning Monteprandone dates back to 1039, when a certain Longinus with such Guido Massaro made a gift of the village and the church of St. Nicholas of Bari to the Monastery of Santa Maria di Farfa who held it until 1300 when, spontaneously, the population for safety reasons decided to pass under the protection of Ascoli. The link with Ascoli then became more and more intense over the years. The old town is typically medieval and preserves the ancient walls (of the XIV-XV) and alleys.
The Town Hall houses the precious library of St. James with the "Codes Autographs" and other miniatures; the Collegiate Church of St. Nicholas preserves a wooden crucifix sec. XVIII. At a mile from the historic center is the Convent of Santa Maria delle Grazie or St. James of the Marches where inside there are works precious. In the chapel of St. James is an elegant Renaissance portal dated 1543.
The hills are full of vineyards that give rise to DOC wines such as Rosso Piceno Superiore or White Falerio of packages Ascoli. The wines are always accompanied with delicious dishes and typical as ham, loin, sausage, chicken livers with eggs, cheese, pappardelle with duck suit, rabbit ('ncip-'nciap), skewers of mutton, lamb chops.

Parco Nazionale Gran Sasso e Monti della Laga
Extended across three regions: Abruzzo, Lazio and Marche, and five provinces: L'Aquila, Teramo, Pescara, Ascoli Piceno and Rieti, with its nine centers, the Network of Museums and Visitor Centers , engaged in the care and protection of land as in the enhancement of the anthropological, the Park is a very complex reality, which requires management practices and governance tools as complex and virtuous, both in terms of administrative, political and socio-economic , both from the environmental point of view.